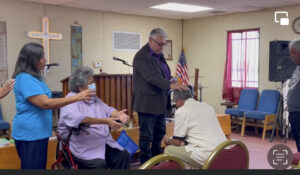 The Holy Spirit directed a second opportunity in 2021 to travel to Arizona and Oregon.  This mission outreach was not anticipated, so soon, after an extended trip to Honduras in November 2021, an international trip by myself and Pastor Bob Monette.

In quick summary, there were three reasons for this mission trip.  First, we felt it important to visit and open more specific discussion with two pastors in Oregon for indigenous outreach east of Roseburg, Oregon.  Secondly to network with Arizona pastors and spiritual leaders.  And thirdly to consecrate The Rev. Carlos Marin as a Moravian heritage minister in Casa Blanca, Arizona south of Phoenix, Arizona.

Highpoints are as follows:

During a trip to the Mexican Border, Brother Carlos introduced us to several Indian Villages, spread out on the dry arid desert.   At the border, outdoors, just 10 feet from the Mexican border, Brother Carlos officiated a meaningful Holy Communion service.  A high point was visiting a small Indian border town.  There we met a senior elder Lay Minister named Sally.  We met at her home and chapel.  It was touching to hear of her fruits.  We were touched deeply by her attitude and words and presented her with some financial help from our pockets.  She indicated she needs bibles.  <Please note:  Thankfully, on December 16, 2021, AncMC Administrative Assistant Milton Cross sent two heavy cases of English Bibles on behalf of UIMM.>

On Wednesday, December 1, Brother Carlos with Brother Bob driving his 4X4 gave instruction for us to travel long distance from Casa Grande easterly and northerly past Globe City to the San Carlos Indian Reservation, not too far from Fort Apache.  San Carlos is Geronimo’s Reservation.  It was here where we networked with the Pastor’s Son as we toured their huge 300 seat church.  This was an important meeting which may open up potential future worship services with UIMM’s leadership team.

At San Carlos, Brother Carlos arranged for a special dinner meeting with three Indians nearby in Globe.  These Indians were associated with the San Carlos Miracle Church.  This meeting was an integral networking opportunity.  We informed them our Moravian Group concern is not to proselyte, but to work together to build the living family of God in context of the soon return of Christ.  It was a good meeting.

On Thursday, December 2, it was an opportunity for Bob, my wife and I to travel from Elroy to Trumps Wall on the Mexican Border south of Sells, Arizona.  This all-day trip was an eye opener for us to pray for the families impacted by illegal immigration.  There at a hardware grocery store near the wall, we saw, first-hand, a driver who appeared anxious.  His vehicle appeared empty coming through the wall.  As we departed the store, a short ways away we saw first-hand, a number of border guards trucks surrounding this SUV vehicle.  Surprisingly, we saw at least five illegals kneeling on the ground in front of it.  The illegals and driver were apprehended!

THE CONSECRATION DAY ARRIVED.  This was a big blessing for all of us!  This consecration service was held on December 5, 2021, 2 pm, at 2831 W Casa Blanca Rd, Bapchule, Arizona.  After over an hour of inspired, spirited worship, Brother Carlos had me take over.  Introducing myself as head of AncMC and UIMM as well as Administrator for the World Fellowship of Moravian Revival Churches (WFMRC),  I extended greetings from UIMM Directors who approved the reaffirmation of ordination for Brother Carlos.  I presented a message on the role of God’s special servants called Deacons from 1 Tim. 3:8.  Also I felt it appropriate to speak on Acts 6:1-8 with the topic of building the Kingdom of God, together, as we work in unity, wherever God wants us to go.  A challenge was presented to Brother Carlos, never to forget that his ordination is being affirmed to open more doors of evangelistic and discipleship ministry in Alaska, and wherever the Spirit of God wants him.

Attending the Consecration service were a number of pastors, friends and supporters of Brother Carlos, showing wonderful and graceful support.  We ended the worship celebration and consecration with a potluck inside of the Casa Banca Church.  Noteworthy, during the Potluck we networked with Pastor Steve, an Assembly of God minister, a lady Pastor from near the Mexican Border, and Evangelist Eric from Globe, who carried a wooden cross on his truck.  All of these Christian leaders were invited publicly and privately to come to Alaska to share the Good News of the Gospel.

After the Consecration Service, on Saturday late afternoon (December 4, 2021), we began our journey from Casa Blanca to Roseburg, Oregon – two and a half days of driving away.  Within the hour of departure and as the darkness approached, we blew a brand-new front tire and drove on the rim.  This caused a delay until the next day.  Receiving two new tires on Sunday morning, we finally, thankfully, began our journey north towards Roseburg, Oregon.

On December 9, both Bob and I were able to have a meaningful and significant dialogue with Pastor Earl, over lunch, at Shari’s Restaurant.  He said that last Friday December 3, we could have met with another Pastor,  but there was a difficulty with his family, so he could not meet with us.  Developments from this meeting is that in Spring 2022, a special trip and meeting will happen with the second pastor in Chenult, Arizona, not too far from well-known Crater Lake, Oregon.

Also since Brother Earl is gifted in the area of teaching on Spiritual Gifts, we agreed that he should travel to Anchorage the first week-end of March 2022 to provide two days of training for our UIMM pastors and to conduct three nights of revival at the Anchorage Moravian Church to build the Kingdom of God.  Bob suggested that Brother Carlos should travel back out to Bethel again for a follow-up series of revival services.

All-in-all this Mission trip to Arizona and Oregon exceeded all expectations!  Thank God, UIMM is now known throughout Arizona and parts of Oregon!  Expectations is that we, UIMM, and those of us chosen by God’s Spirit to travel, even though it is expensive and emotionally and physically taxing, have done something new and good for God’s Kingdom.

Together, UIMM’s leadership and all those that pray for revival and continued outreaches, please note that together we have done our part to create a spark for the Indigenous Churches to wake up!  Also for them to be accountable and with us to win lost souls for Christ and to disciple them, and to participate in mission with us.  And importantly to encourage the younger generation to take over.